Sometimes still referred to as Shingan (heart's eye) ryu (school) this classical tradition was founded by the bushi (warrior) Takenaga Hayato and was based on battlefield principles (Heiho) developed during the later half of the Sengoku period. Whilst developing the Yagyu Shingan ryu Takenaga was clearly influenced by his studies of the Shindo ryu of Ushu Tatewaki Katsuyoshi (Shindo Tatewaki). As a result of his influence Ushu Tatewaki is acknowledged first in the genealogy within the development of the Yagyu Shingan ryu.

Takenaga also studied the Shuza ryu, Shinkage ryu, Toda ryu and he received the gokui (secret teachings) of the 1Yagyu Shinkage ryu from Yagyu Tajima No Kami Munenori (1571 - 1646). As far as we can ascertain it was during Takenaga Hayato's service and studies as a disciple of Yagyu Munenori, he became the first person outside the Yagyu family directed to adopt the name Yagyu in his tradition, and thus the Yagyu Shingan ryu was founded. Later he returned to his home in the remote countryside of Sendai where he taught the farmer/warriors (Ashigaru) until his death. His teachings becames so popular that many became disciples of the tradition. Although his date of birth and death is not known to us, it is thought Takenaga Hayato existed during the early Azuchi-Momoyama period (1568-1600) and the early Edo period (1600-1868).

Takenaga Hayato acquired a place where he could live in peace and changed his name to Jikinyu. Until the end of his life he worked instructing the martial spirit of the Shingan ryu in the Sendai domain where he lived in seclusion. An inscribed stone memorial tablet, erected several centuries ago in honour of the founder, depicts in detail 'Master Student Service'. The memorial is located a short distance from the estate of Takenaga Hayato which has also been recorded for historical purposes by the Momo Cho Education Committee (see gallery). 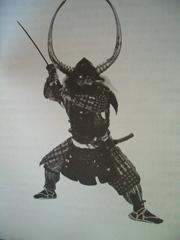